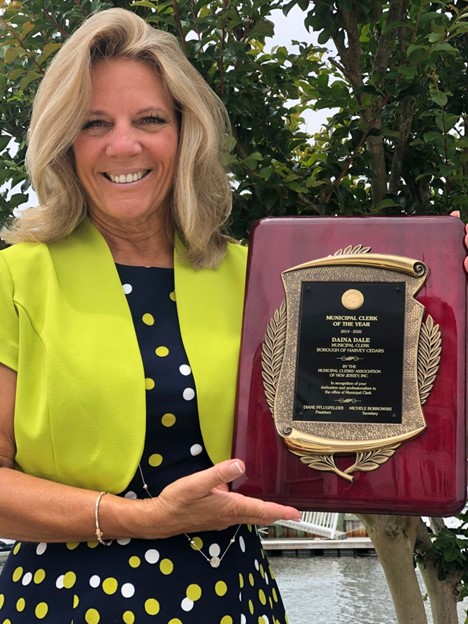 Congratulations Daina Dale, municipal clerk for the Borough of Harvey Cedars for being selected as the Municipal Clerk of the Year for 2019-2020 by the New Jersey Municipal Clerks Association (NJMCA).

Traditionally, the award is presented at the association’s annual spring meeting. However, due to the pandemic, the meeting and announcement of Daina’s award were postponed until June 2021.

Municipal Clerk of the Year is NJMCA’s most distinguished honor. There are 564 municipalities in New Jersey, each with a municipal clerk. Even though Harvey Cedars is the tenth smallest municipality in population, Daina stood out amidst the hundreds of other clerks. She is the only Long Beach Island municipal clerk to ever be chosen for this honor.

When Daina and her husband, Michael Forgione, moved to Harvey Cedars in 1991 she had no idea what a borough clerk did. Though she was familiar with Harvey Cedars because her husband’s family has owned a house in High Bar Harbor since 1962.

Daina had a full-time job in Atlantic City when she took a part-time position in 1995 as secretary for the Borough of Harvey Cedars Public Works Department. The job was for three days a week and paid just $7.50 an hour. Daina really enjoyed working with the public. So, when a full-time position opened in the borough’s Parks and Recreation Department, she took it.

Daina’s hard work and dedication were noted by one of the borough’s three commissioners. Former commissioner, Judy Gerkins, suggested that she take courses at Rutgers to get certified by the state of New Jersey as a Registered Municipal Clerk. Since becoming a Registered Municipal Clerk, Daina has continued her education and obtained other important certifications that allow her to better serve Harvey Cedars.

When she started as municipal clerk, there were only two fulltime employees: Daina and the Chief Financial Officer/tax assessor. In a small borough like Harvey Cedars, all employees have a variety of jobs.

Serving as the municipal clerk for Harvey Cedars is a complex job. And Daina Dale excels at it. That is why she was honored by NJMCA as Municipal Clerk of the Year. Out of all her duties when asked what her favorite part of the job is Daina responded, “helping people and answering their questions.”