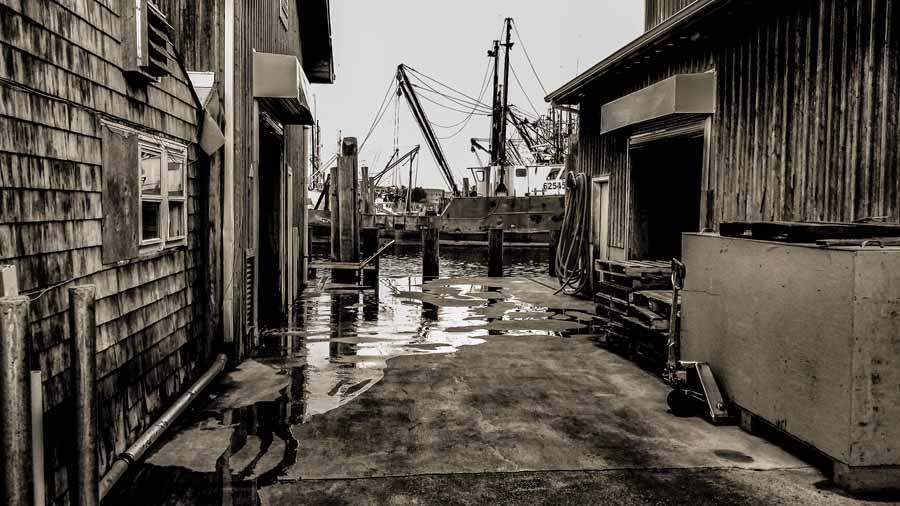 These feelings and memories hold special places in my heart. This is Viking Village as I’ve always known it, an amazing and timeless fishermen’s village. To the general Long Beach Island visitor this is a smelly alley to generally keep away from. To me it represents several phases of my life that I’ll always happily return to in memory.

Before I was old enough to bluefish on Miss Barnegat Light, Carolyn Ann III sufficed for a day of “deep sea fishing.” My father and I would always get there early in the morning. This locked in our favorite back corner spot of the boat and allowed for a bacon egg and cheese sandwich from Carolyn Ann III’s galley. Before hopping on the boat, we would always walk down the docks towards Viking Village. We would look down this particular alley together and share our love of rustic old nautical wooden fishermen’s stuff. Well at least that’s what my dad enjoyed. To me it was just simple. It was cool. To share the feelings together was most important. The smell of a scallop packing area is not for the faint of heart. However for me this particular smell meant a day fishing with my dad. I wasn’t even ten-years-old yet. I had no idea how much this smell would mean later in life.

Once in my teens I could finally stomach a bluefish trip. My dad and I shared many memories fighting blues on Miss Barnegat Light. He would always take my best friend and I just before school started each year. My mother, as a teacher, was always back a day early. This gave us a chance to enjoy one last day of summer. Just like when I was younger, my father and I would sneak in a stroll to look down this alley and whiff in the nostalgic smell. The time of year was usually early September which typically features a nostalgic combination of temperature and dew point. It’s the cool and crisp feeling at the bus stop on the first day back to school. This feeling was much better at Viking Village than the next day at the bus stop.

At eighteen-years-old I had just graduated from Southern Regional High School. My father was suffering from a series of medical complications stemming from a bad motor vehicle accident earlier that year. Life had completely changed. My father could no longer come out fishing. I found myself working as a mate on Miss Barnegat Light that summer. I found myself looking down this alley before my shift began. It looked exactly as it always had. The only thing I could focus on at first was holding back tears. Yet the scene grounded me. It gave me strength to move on in life, remembering the good times. The alley became my totem and got me through a summer of hard work. It got me through the feeling of being there without him. My father eventually passed away in 2010 after twelve years of fighting medical complications – harder than I’ve ever seen anyone fight. I’m very grateful for the extra time with him this allowed. He’s been gone now for eight years but every time I peak down this alley, I know he is with me.

Today, I have thirty years of Viking Village memories and all is the same in this alley. The smell. The feel. Only this time, I was picking up scallops for a charity fundraiser called Fun(d) the Dream. The founding of Weather NJ was dedicated to my father, the Honorable Paul J. Carr. A main pillar of it will always be paying it forward. Even though I wasn’t there to go out fishing, I couldn’t help but take another peak down this alley and reflect on several tiers of happy life memories.