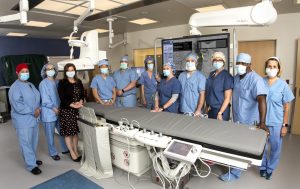 As the shore community began to expand in the 1950s, residents believed that a local hospital to serve the community was vital. In 1955, local women formed the Southern Ocean County Hospital (SOCH) Auxiliary.

Tasked with raising 100% of the funds for a much-needed hospital, the Auxiliary Ways & Means committee, chaired by Ship Bottom resident Zena Josephson, teamed up with many volunteers to reach their goal of opening a non-for-profit hospital within the community. In 1972, after tireless fundraising efforts, Southern Ocean County Hospital was born. This same year, The Chrysanthemum Ball, the Hospital’s first annual gala, was established to create a source of funding for expansion and growth of new services and technology. Equipped with fifty-six beds and a staff of seventeen physicians, SOCH was prepared to care for the growing population. 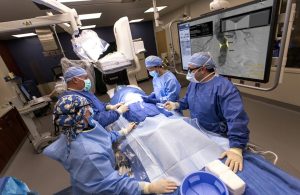 Numerous investments to facilities and services brought new treatments and skilled expertise to the hospital and throughout the community. In 2010, SOCH became a member of the Meridian Health network of hospitals and services, enhancing access to a new level of care. The hospital’s new name: Southern Ocean Medical Center reflected its continued growth and advancements.

“Southern Ocean Medical Center continues to serve as a place the community can turn to for outstanding, compassionate care,” said Michele Morrison, MPH, BSHA, RN, president, and chief hospital executive. “It is important for residents to know the hospital is prepared to take care of you now and in the future, for whatever your health care needs may be.” 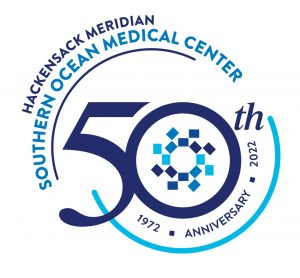 1972 with fifty-six beds and a medical staff of seventeen physicians to care for the injured and ill.

The first annual gala, The Chrysanthemum Ball, was established to create an annual source of funding. $2 million was raised for expansion and growth of new services and technology.

1980
The $3.5 million James Noble Pavilion was constructed, adding a second floor with another forty beds.

1997
The three-story Medical Arts Pavilion provided space for outpatient services such as renal dialysis, The Speech and Hearing Center and an ambulatory surgical center.

1998
The ten-bed Maternity Suite opened to address women’s health needs and the growing number of deliveries in the community.

2010
SOCH becomes a member of the Meridian Health network of hospital and services, enhancing the level of care and service to the community.

2010
The hospital’s new name, Southern Ocean Medical Center, reflects its growth and future direction in enhancing the level of care and service to the community.

2018
$1.5 million investment of GE Innova IGS 540 angiography suite for interventional procedures for the diagnosis and treatment of cardiac and vascular disease.

Mark your calendar for the 50th Anniversary community celebration on Saturday, September 10, 2022, from 11 a.m. to 2:00 p.m. on the campus of Southern Ocean Medical Center.