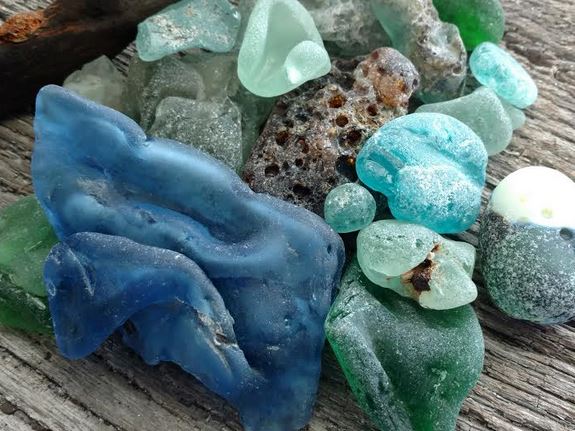 Written and photographed by Sara Caruso

of the best things about sea glass collecting is that no two finds are alike. Every piece is a different shape and tells the story of the area it was found. Some pieces look as if they were stretched and twisted like hot taffy. If you  find sea glass like this, it is likely a piece of fire sea glass; glass that was melted in a fire, cooled by the waves and tossed by the tides. This natural process results in sea glass with unique qualities and shapes. It is impossible to say what originally melted the fire sea glass, but we can make an educated guess if we learn the history of a shoreline.

Fire sea glass comes in many forms and has many names. More commonly, it is known as bonfire or campfire glass as it was once believed its only source was from bottles melted in beach bonfires. However, there are other possible sources such as historical and present-day structure fires and trash dump fires. Prior to environmental regulation, some beaches were used as the municipal dump where open burning was utilized to reduce the volume of trash to make room for more. Trash fires may also have been the result of spontaneous combustion or vandalism. Structure fires at the shore have made headlines for generations and continue to do so. It is easy to underestimate the temperatures reached by these fires.

The melting point of most glass is between 1,200 to 1,400 degrees Fahrenheit. The starting temperature of the average bonfire is around 600 degrees. As wood is added gases increase, burn off and the temperature rises. Eventually the temperature of a bonfire can exceed 2,012 degrees. Old trash dumps would have contained a wide variety of refuse, including paper and household chemicals. Depending on the fuel, a dump fire could have easily reach temperatures above 1,600 degrees. In a structure fire, temperatures can top out at over 2,000 degrees. Any of these temperatures is more than sufficient to melt glass.

Some collectors confuse fire sea glass with fulgurite, glass created by lightning striking sand. Fulgurite is a very fragile tube-like glass structure and is a rare occurrence. Sea glass melted by a lightning strike is even less likely.

Fire sea glass is found in many forms. Occasionally, beachcombers find whole melted bottles that look squished and contorted. Sometimes the sudden temperature change caused by cool ocean water hitting hot glass creates fire sea glass with an interesting crackle effect. On rare occasions when hot glass encounters waves, it instantly hardens around a water droplet creating a permanent water bubble. The water droplet can be seen moving inside the bubble when the fire sea glass is shaken. When waves meet hot glass there really is no end to the possibilities.

Aside from odd shapes, fire sea glass is also a time capsule for the history of the beach where it was found. Each piece of fire sea glass holds a little bit of its past; fragments of ash, wood, metal, and sand that adhered to the melted surface or became trapped inside as the melted glass liquefied and cooled.

Fire sea glass embodies the power of one of nature’s most destructive forces. Its story is the prefect representation of everything sea glass is and will become; sand and minerals melted by fire, formed into glass, returned to the fire, changed, history gathered, washed by waves, and finally sand once more.