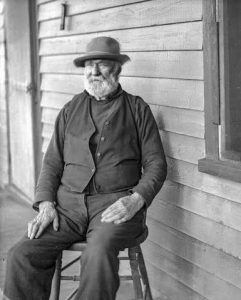 This was reported, by those who knew him, to be the favorite poem of Island legend Thomas Bond later in his life. Gould’s melancholy meditation on the meaning of life and legacy could have easily served as his epitaph. Bond’s life was inexorably intertwined with his long-gone old hotel, the Long Beach House. But unlike the poem’s conclusion that no track nor trace will remain of one’s legacy when written in the sands of existence, Bond’s has not been so erased from this mortal coil as we have been led to believe.

As it did with so many over the centuries, the New Jersey shore enchanted Bond and kept him coming back until he never left again. A Boston-born jeweler living in New York, hunting brought Bond to the Tuckers Beach area of southern Long Beach Island in the 1840s. The haunt for hunters at that time, though, was just a hop north over Old Inlet, which used to cut between Tuckers Beach and Holgate, on the southern tip of the main island — the Philadelphia Company House.

In the early 1810s, Joseph Horner, a former manager of one of Tuckers Beach’s oldest hotels, got grand ideas and built a boardinghouse in the middle of what was then a wide stretch of virgin Long Beach Island.

A NAME IN THE SAND

Alone I walked the ocean strand;A pearly shell was in my hand:I stooped and wrote upon the sandMy name—the year—the day.As onward from the spot I passed,One lingering look behind I cast;A wave came rolling high and fast,And washed my lines away.

And so, methought, ’twill shortly beWith every mark on earth from me:A wave of dark oblivion’s seaWill sweep across the placeWhere I have trod the sandy shoreOf time, and been, to be no more,Of me—my day—the name I bore,To leave nor track nor trace.

And yet, with Him who counts the sandsAnd holds the waters in his hands,I know a lasting record standsInscribed against my name,Of all this mortal part has wrought,Of all this thinking soul has thought,And from these fleeting moments caughtFor glory or for shame.

Businessmen from Philadelphia, the most frequent guests of the scattered early hotels and boardinghouses dotting the sparse barrier island, saw even more potential in Horner’s boardinghouse and the wilds surrounding it, bought him out and greatly expanded the structure into a large, modern hotel in 1822. This expansion, along with similar hotels going up in what became Surf City, Barnegat Light and down the coast in Cape May, represented the first seaside resort hotels in the United States.

Today’s beach resorts, from Maine to Texas and Washington to California, all owe their existence to these first hotels on Long Beach Island and the investors who saw new profit and new entertainment possibilities in the sand.

The Philadelphia Company House, then operated by Lloyd Jones, was the long white hotel standing tall in a green ocean of dune grass, brush, bayberry, and pines that Thomas Bond first laid eyes on when he traveled down Barnegat Bay from New York City to the legendary hunting grounds behind Long Beach Island. Bond soon bought the Philadelphia Company House and all the grounds, including an early life-saving station. His fascination with lifesaving, first established as a government service in 1848 in New Jersey, was captured in Point Pleasant after witnessing heroic efforts to rescue those on a wrecked ship. This led to his assumption of the station’s duties for the next forty-years. In June 1852, the Philadelphia Company House opened for the season as the new Long Beach House. In the coming years, that name would change again to become known simply as Bond’s. Not just the hotel, but the entire southern point of Long Beach Island, along with its life-saving station, which even the government referred to as Bond’s.

This reputation and his famous hospitality earned Bond a loyal clientele. Sadly, the march of progress would overwhelm his congeniality and the high regard so many held him in.

The emergence of Beach Haven as a planned resort based around two massive hotels, largely in response to the eroding loss of Tuckers Island, sealed the fate of the old and first hotels, like Bond’s Long Beach House. By the early 1880s, Bond’s closed for the season for the last time while the 84-year-old man himself retired from his self-appointed life-saving duties, though the station would carry on. Bond lived out his days in the care of friends and locals, like Joseph Holgate, who made sure he never went without the frugal creature comforts he desired. His death in 1892 was followed by an outpouring of sadness and affection, highlighted by a gregarious wake in Beach Haven toasting his cherished memory. 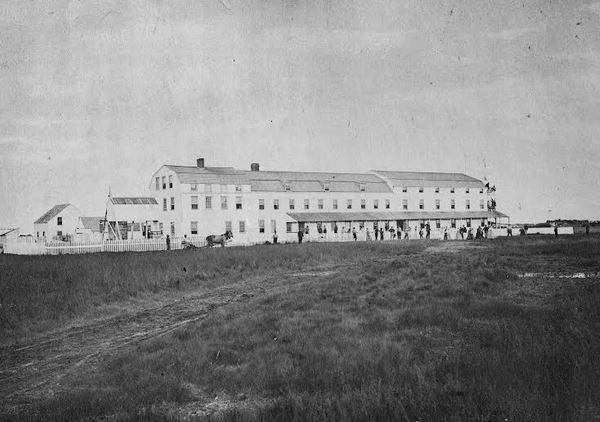 But what of the old hotel?

From 1883 to 1909 it sat, splintering, and crumbling away in the Island sun, a quiet retirement not unlike its last and longest owner. At long last, it was broken up and salvaged as a derelict in 1909. It has been written that the very sand upon which the House stood was lost to Old Inlet, re-emerging once again after a storm, not long after its demolition. Fortunately, such beliefs were mistaken.

The location of those storied sands had passed into memory and memory had passed into the great abyss, rendering such common knowledge beyond the reach of later generations of Islanders. But new research, making use of previously unavailable maps from the time as well as invaluable new imagery, has revealed that the site of Bond’s House, notable as one of the first shore hotels in American history, is high and dry, and has always been so.

The unyielding tide has ravaged the Island over the last two centuries. Nowhere has it been as dramatic as Holgate. The boulevard and narrow line of houses that separate the road from the narrow beach on the other side today was once the middle of the Island in that area. Joseph Horner and the Philadelphia investors looked out upon nearly a mile of rolling green meadows, ponds, and dunes from the windows of the Philadelphia Company House centuries ago. As did Bond when the Company House became the Long Beach House. Horse carts passing over bridges spanning freshwater ponds between the hotel and the beach were once necessary for guests not up to the arduous walk to reach the refreshing waters of the Atlantic so tantalizingly close yet in reality quite a distance from the nearly bayside House. Between 1920 and 1930, that expanse which served as the House’s grand front yard was largely lost.

Year after year, as the shoreline advanced, Bond’s life-saving station was forced to move back several times. To save it once and for all, the station was moved to its current location, now a private home on the bay at the end of West Janet Road. 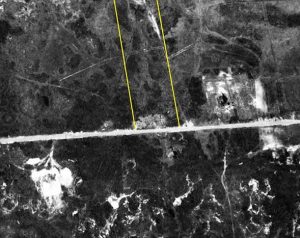 Though nothing survives of Bond’s storied haunt, save for the dining hall door displayed at the Long Beach Island Historical Museum, the location of the old hotel remains. It has seen the wilds overgrow the site countless times and the ocean wash-over during the worst storms of the last century, scouring and spreading the sands far and wide. And still, the site endures above the waves. Today, even after the devastation of hurricane Sandy, the area is home to new cottages and a freshly paved boulevard.

Spanning the sands from Joan Road on the north, West Janet Road to the south, and across the boulevard to the east, Horner’s dream was carried forward on this hallowed ground by those Philadelphia investors and Lloyd Jones and built with passion into a legacy larger than life by Thomas Bond, the old Boston jeweler. They left us the sands as naked as they were when Joseph Horner first traipsed across the once grand meadows and dreamed of a hotel of his own, setting in motion events that would shape the future of Long Beach Island and American shores from coast to coast.

Where Bond once tracked the sandy shore, He has indeed left us track and trace, of memory — of sandy lore.