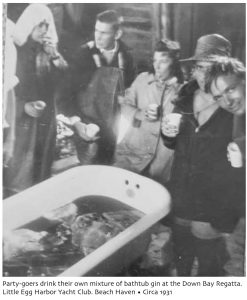 By Gretchen Coyle
Photography courtesy of the NJ Maritime Museum

Rain pounded the roof of the hanger once used by Warren Webster’s gyrocopter, leaks bounced off already wet oilskins of everyone involved. The Down Bay Regatta at the Little Egg Harbor Yacht Club had cancelled all sailing races for that Saturday in July 1931. A howling nor’easter left members and visitors to create their own fun. And that is exactly what the participants at the Little Egg Harbor Yacht Club did.

Up Bay and Down Bay Regatta weekends were popular with the boating and sailing members of the Little Egg Harbor Yacht Club, who traveled Up Bay to the yacht clubs at the north end of Barnegat Bay once a summer; while the Up Bay group came to Beach Haven towing a variety of sailboats to participate in parties and sailing races on the racecourse of Little Egg Harbor another month. In tune with the formality of the times, commodores, and trustees were adorned in their Class A uniforms and greeted the visitors upon arrival with all sorts of pomp like salutes, cannons, and hearty cocktail parties.

Sailing races pitted the best skippers and crews against the top competitors from other clubs. Friendships have grown through the generations. The Up Bay and Down Bay Cruises started around 1920 and have continued in one form or another for over a century, except for the Great Depression, World Wars I and II, and other unforeseen happenings which cancelled participation. Today, the Down Bay Cruise is held in a very informal manner at the Little Egg Harbor Yacht Club in August every summer where a smaller group of sailors compete.

The term “bathtub gin” comes from Prohibition (1920 – 1933) when poor to mediocre homemade booze was mixed in large tins or tubs. In this case “bathtub gin” is used loosely as purchased gin was the favorite for this bathtub concoction as it could be mixed with most anything.

An old bathtub was place in the middle of the sandy floor and bottles of gin were poured in, followed by whatever type of liquor, juices, cherries, and olives attendees had brought. Everyone grabbed a glass. Yes, real glasses were used in those days — this writer and a friend were hired to wash glasses summer Sunday mornings at the yacht club during the 1950s.

The party continued for hours until a proper lady climbed into the tub of bathtub gin, laying down in the mixture while everyone roared.

We’ve all heard about wild stories during Prohibition. This one is true: the names have been eliminated to protect the not so innocent. Old timers once declared it was the best party to ever take place in Beach Haven.