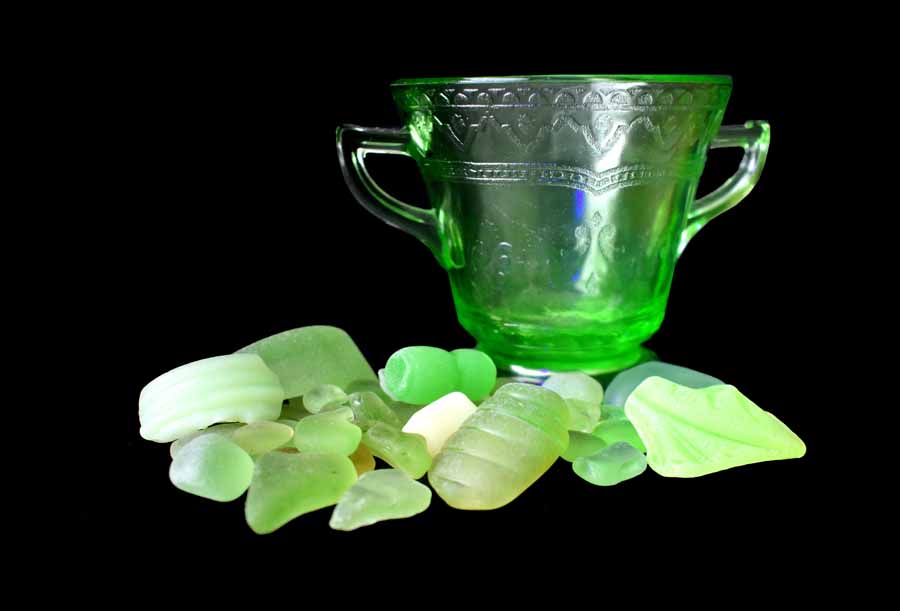 Many of us remember the brightly colored vintage glassware displayed by our grandmothers. With colors of bright lime green, yellow and greenish-blue the pieces seemed to glow with a vibrant hue. Little did we know grandmother’s oddly radiant glassware was atomic. Uranium glass or ultraviolet glass, commonly known as UV glass, was made at a time when a newly discovered material was rising in popularity. Manufactured as early as 1880, UV glass reached its height of popularity in the 1930s and early 1940s. It could be found in homes throughout the United States and Europe. The use of uranium in glass sharply declined at the end of World War II. Today, uranium glass is rarely made for general use, but it can still be found in laboratories for testing and in the form of ultra rare UV sea glass.

Early in the 20th century, uranium and radon were seen as miracles of modern science and invention. Radioactive materials were added to many everyday products to give them an atomic twist. Shoe stores had radiation emitting fluoroscopes to x-ray the feet of children to ensure a perfect fit. Uranium was added to porcelain dentures and cosmetics to impart a natural luminescence. Even children’s chemistry sets came with four different types of real uranium. Understandably, the popularity of uranium extended to glassware for the home. During manufacturing uranium oxide, in the form of diuranate, was added to glass for coloration before melting.

Uranium glass was manufactured in several types of glass and colors. Fire-King by Anchor-Hocking Glass Company produced Jadite, a green milk glass that was popular for kitchenware. Custard glass is a pale yellow opaque glass. Depression glass refers to transparent or semitransparent pale yellow to light green glass produced during the Depression Era by multiple manufacturers. Burmese glass is frosted opaque glass in pale pink or yellow. Opaque alabaster glass in shades of white to pale green was used mostly for decorative glassware. Uranium glass was also produced in transparent greenish-blue, amber and brown, opaque light blue and clear. Today, the most famous of these colors is Vaseline glass, the translucent yellow-green colored glass which resembled the petroleum jelly. 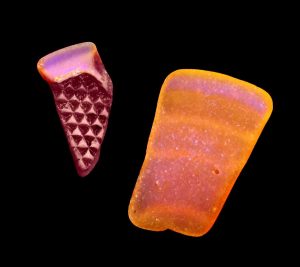 Red and orange glass glow because of cadmium.

There is a difference between UV glass and uranium glass. UV glass simply means it reacts with ultraviolet light. Red, orange and yellow glass, especially those used in tail lights and lenses prior to the 1960s, contain cadmium and tend to glow bright orange or yellow. Uranium glass is one example of UV glass, but not all UV glass contains uranium.

There is no truth to the old rumor that UV sea glass is hazardous. UV glass ware contains infinitesimal trace amounts of uranium and is harmless. Daily exposure to sunlight contains more radiation then you could ever receive from a shard of uranium sea glass.