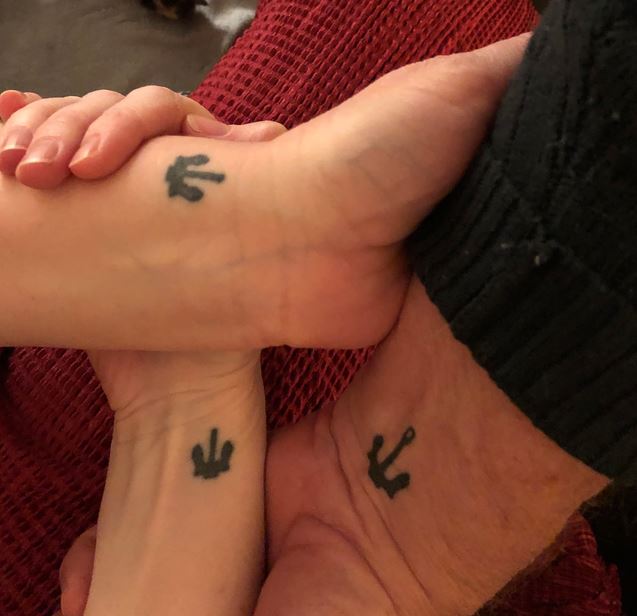 When all else fails – they hold.

“I’m the fourth Frederick,” said Rick Baldt as he explained an enduring family tradition.” His name Rick is derived from Frederick as is his daughter’s name Erika. Together they carry on the name of Rick’s great grandfather, genius, inventor, and steel industry visionary Frederick Baldt.

“He was the most sought-after man in the world by the developing steel trade. He invented bigger, faster casting methods that revolutionized the industry,” said Rick of his namesake. “He was a true genius.”

Born in Philadelphia, Pennsylvania in 1841, Frederick Baldt rose to superstar status in the steel industry at an early age — eventually holding several U.S. and Canadian patents including the Baldt Stockless Anchor. Marketed under the logo “When all else fails — they hold”, today it remains the gold-standard for ships moorings. Baldt produced DiLok marine chain, the first 6-inch high pressure-rifled cannon and invented the box wheel system for railroad cars. He was integral in the development and growth of steel manufacturing in the United States. “He was known in the industry as Vulcan Baldt with good reason,” said Rick.

Between 1871 and 1896, Baldt founded no less than five steel production companies including Eureka Cast Steel Company of Chester, and Baldt Steel. Formed in 1901, the Baldt Anchor Corporation was renamed Baldt Anchor, Chain and Forge Corporation in 1926 and remained in business under various names and owners until 1975. “He had the reputation of being a hard-working, very proper, staunch gentleman,” reflected Rick. Nearly a century later, the inventions and innovations of Frederick Baldt are still in use. Massive Baldt mooring systems are used to stabilize off-shore rigs and his anchors and chains secure ships of the U.S. Navy. 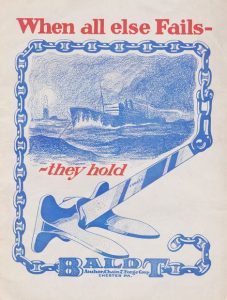 The legacy of the Baldt anchor continues in Rick’s life as well. Its serendipitous presence in miniature form had a role in the decision of Rick and his wife Beth to make the 175-year-old life-saving station in Ship Bottom their home.

While looking at the property they stumbled across an old lamp made from a rare salesman’s sample size Baldt anchor. “It felt like a sign that we were in the right place,” Rick recalled. “It was like we just needed one more Baldt anchor and all would be right with the world.” Since its purchase in 2015, the building has undergone substantial renovations. “Most recently, we’ve replaced thirty-two windows, installed a new duel zone HVAC system, and repaired and remodeled the three bathrooms,” he explained. “I anticipate replacing the side porch next because it’s run out of wood for me to sink nails into.”

Rick’s memories of LBI span every decade of his life. “I’ve been coming to LBI for sixty-six years,” he said. “I have fantastic memories of the Surf City Hotel when Leroy Lewis played the Wurlitzer [organ] and of Kubel’s in Barnegat Light. When it was closing time — no one wanted to leave.” Days were spent on the beach and in the water. “I was the best bodysurfer on the beach then, and I’m still the best. Well…in my mind,” declared Rick with a laugh. 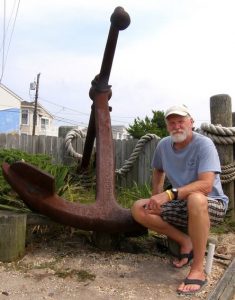 Over the years, with an enduring sense of permanence, Rick and Beth brought their daughters Erika, Jessi, and Amanda to LBI. “We brought them here throughout their lives,” said Rick. “Family, that’s what it’s all about.” Today, their grandchildren spend time at the Baldt’s home in the old Ship Bottom life-saving station. “Having them run through the house…well…it’s something else,” chuckled Rick.

Unlike the ship anchors created by Frederick Baldt, not all Baldt anchors are made of steel. Inspired by the symbolism of an anchor as a family insignia, in 2010 Rick’s daughters Erika Baldt and Jessi LaGrou had a small Baldt anchor tattooed on the inside of their left wrist. “I thought it was amazing,” said Rick. Now, like his daughters, Rick’s left wrist bears the same permanent insignia.