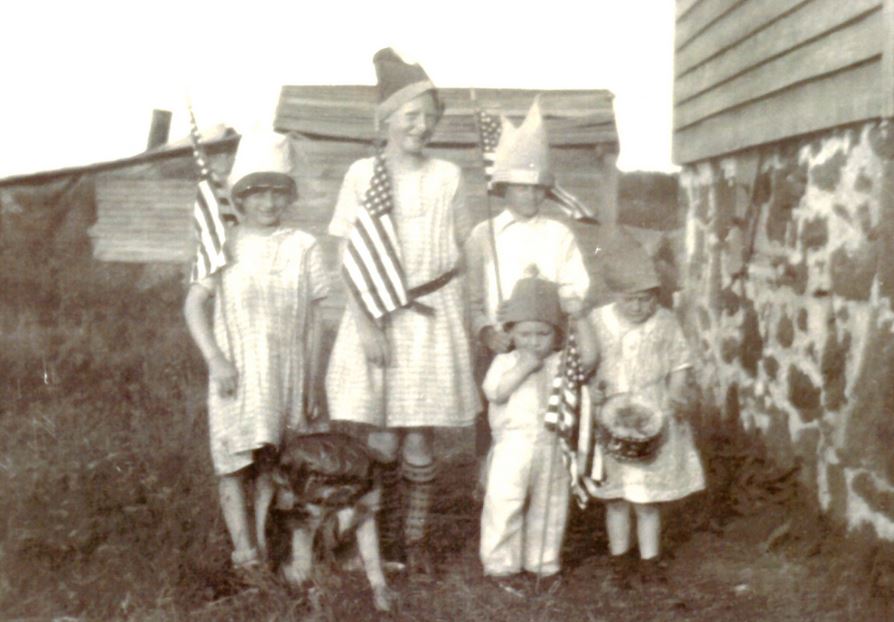 It was 1929 – the beginning of the Great Depression. I was about four-years old. My siblings were ages two, five and eight. I remember we left Massachusetts with our Mom and Dad and traveled into New York State, arriving in time to pick apples. We made this trip in a Model-T Ford. Mom sold her coat for fifty-cents which was the cost of the toll to travel through the Holland Tunnel. The trip moved slowly as the top speed for cars back then was 30 or 35 miles per hour. We also stopped wherever we could find work – mostly picking crops – to earn a few pennies. At one stop we were allowed to pick up peaches that had fallen to the ground. We couldn’t take them across the state line. So, we ate them right then and there. Life was a struggle back then.At night we pitched a tent and slept along the roadside. We were on our way to Florida in search of work. But we were not able to find work there, and soon we were on our way back to Massachusetts. Before leaving Pensacola, Florida, Mom gave birth to our baby brother. He was born in our tent. On the way back to Massachusetts our car broke down in Manahawkin, New Jersey, so it was here that we stayed. We pitched our tent in a field on Route 9 and became squatters. The field where we lived is now the ball field across from the Oxycocus School.

Our next move was to a little cottage in Barnegat on Route 9. The cottage is still there. However, it is a produce stand now. Two of my siblings and I were of school age. We walked to school on Birdsall Street – which was just under two miles – one way. The schoolhouse is now the Barnegat firehouse. We weren’t at this location for long when we moved back to Manahawkin to a house on Bay Avenue.

From there we moved to a farm on Parker Street. It was known as Gill’s Crossing. We used the chicken coop in the back as a playhouse. The house is no longer there. The train crossed the street here and went along to the Manahawkin Station by the schoolhouse. The train station has been moved and restored and is now a museum at Heritage Park.

All the homes we lived in had no facilities. No electric, running water or inside bathroom. We grew up with kerosene lamps, a hand pump for water, and a path to the toilet. Wood burning stoves, a black kitchen range, and a parlor stove were the only sources of heat. The bedrooms were unheated. The stoves used a lot of wood. So, our Dad would go into the swamp and cut wood. My older sibling would help him stack the wood in the wood box behind each stove.

We walked to school along the railroad tracks. There was an area we called Saw Dust Alley where the road there was covered with sawdust. It was a favorite place to check out on the way home from school.

The fields and woods had an abundance of huckleberries. My siblings and I picked them and sold them along the roadside. We also picked blackberries. Some of these were canned and some were sold. Blackberries were ten cents and huckleberries were twenty-five cents a quart.

Mom did our laundry outside on a scrubbing board in a galvanized wash tub. We helped pump the wash water. Our yard was our clothes dryer. In the winter she did the wash in the kitchen.

Our shoes and clothes were always hand-me-downs. Mom had a treadle sewing machine. She would remake the clothes to fit us. She was so handy at making do. I surely learned a lesson or two from her throughout the years.

In the summer we walked to Manahawkin Lake, which is now A. Paul King Park. We learned to swim there. We all wore homemade bathing suits that stretched down past our knees when they got wet. In the winter we went ice-skating on the other side of the lake. 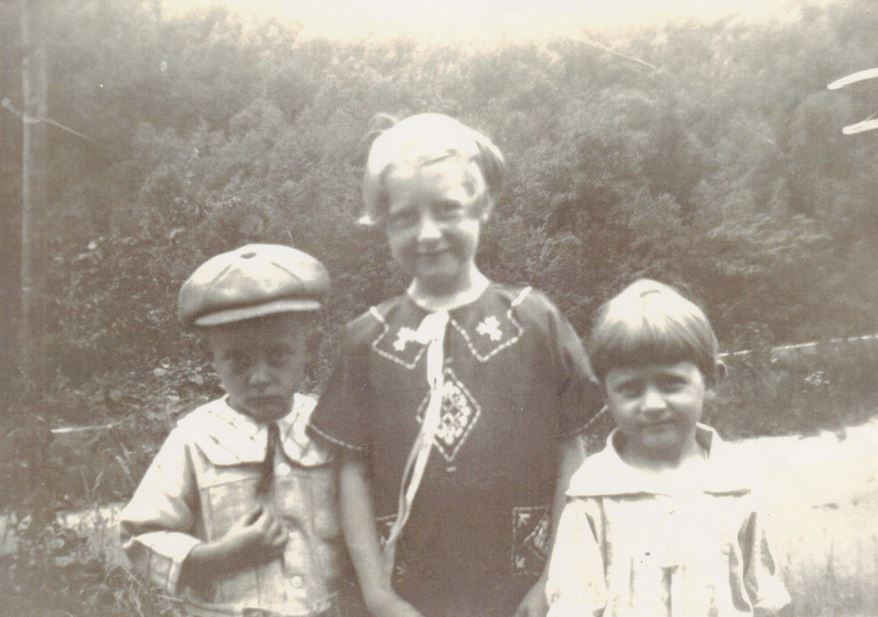 We always had a Christmas tree. Mostly, our ornaments were handmade. No matter how humble or plain, the excitement and anticipation were always high. We got used toys and maybe a small new item. For Christmas, Mom always made something new for our dolls. All my dolls had been loved before, so I was a foster mom to them. We helped make holiday wreaths from grape vines and sprays of holly. We went around town selling the homemade wreaths for fifty-cents each. We did pretty well. Dr. Hilliard gave us a box of chocolates and some fruit to share. He was a godly man. Dad worked around the grounds and flowerbeds of Dr. Hilliard’s home.

There were no craft stores back then. But in those days, Sears and Roebuck mailed out a sample wallpaper book. It became our crafts. We made paste from flour and water. We made chains for the Christmas tree, Valentines, and dresses for our paper dolls.

On Sundays, dressed in our best clothes with a penny for the collection – if we had one – we walked to church on Stafford Avenue. I learned of Jesus early. When I was hurt, or something just wasn’t right I would lean on him to make it better.

Through the many trials and tribulations of my life I have always trusted in my faith.

We were surrounded by nature. Sometimes, Mom would take walks with us. She taught us the names of the wildflowers and showed us teaberries. One of the nicest gifts from nature was to hear the Whip-poor-will bird sing at dusk. If we were still outside when it started to sing, we knew it was time to head home for the night. The 8 p.m. train whistle signaled it was time for bed.

When I was seven-years old my little brother died. He was just three-years old. Shortly after that, in 1937 our house burned to the ground. Two of our neighboring families took us in for a while. The townspeople helped with a rental house, some furnishings, clothing, and other small things.

Next, we moved to Cedar Run on Oak Avenue. The house is no longer there. Now the walk was much longer to Manahawkin for our groceries. During these years, the WPA [the Work Progress Administration] came into existence. Dad now had a job. When we had money or relief orders [food stamps] Mom would take the wooden wagon and all of us to the American Store on the corner of Stafford Avenue and Route 9. Occasionally, she bought a roll of Necco Wafers – multi flavored candy wafers about the size of a nickel. They were easy to share. The little schoolhouse, which is now part of the Cedar Run Church, was a sewing factory at that time. Mom would make a list of clothing items needed and her order would be filled there.

While living in Cedar Run, every year on October 12th we went to Cedar Run Bog to pick cranberries. I loved to do this. Many years later I passed my love of cranberries on to my family. Over the years, I received quite a few ribbons from the Chatsworth Cranberry Festival for my entries of baked goods, food, and various crafts.

We again moved to Manahawkin on Stafford Avenue to the Calvary Cottage, which is still there. It is in between the Methodist Church and what was the town hall. I attended Tuckerton High School. My heart will always belong to Manahawkin where the years of my youth were spent.During the 1940s I worked at the Beach Haven laundromat and at Fort Dix. After it opened in the mid 1940s, I was a seamstress at the Barnegat Sewing Factory. At first, we made dolls. Later, we made clothes. I taught Sunday school, sang in the church choir, was an usher, and a greeter. My brother-in-law and I started the first Boy Scout den in Barnegat. My oldest son Allen was a Boy Scout. He went on to receive the God and Country Award from our church. This is a very special award received by only a few scouts. My younger son Tom worked in the mission field from 1977-1988. He met his wife Mary there. They did missionary work in Texas and Brazil. I was a member of the Women’s Society of Christian Services and served as secretary. I also made many dinners for the covered dish suppers at our church.

Born in 1925, Dorothy West Thompson has lived in Barnegat, New Jersey for more than sixty-three years. In 1999, Dorothy wrote a personal memoir documenting her family’s journey through the Great Depression to share with her younger sister Ethel.