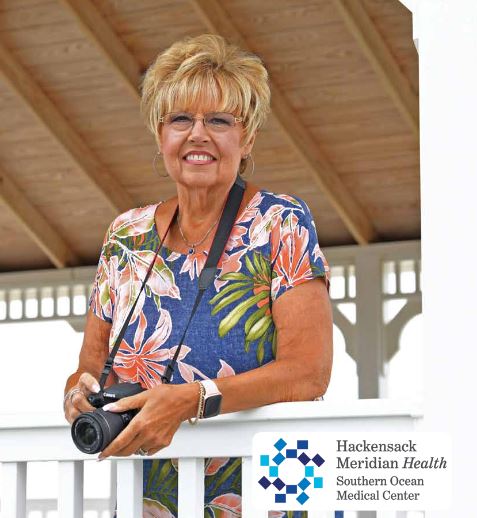 Hackensack Meridian Health Southern Ocean Medical Center – Bariatric Surgery provides the first step in a new healthy lifestyle for Barnegat woman. Diane Pirone has battled with weight problems her entire life. She knew she had to make a serious lifestyle change when a series of medical problems started to slow her down. At the time Diane weighed close to 400 pounds, she was diagnosed with Type II Diabetes and suffered from high blood pressure, sleep apnea, lymphedema, and chronic back pain which caused her to have to use a walker.

Taking Charge
Determined to turn things around, Diane began researching bariatric surgery and spoke with her primary physician about some of her options. Insistent on finding an accredited program, she consulted Jonathan Reich, M.D., at the Center for Bariatrics at Southern Ocean Medical Center where he explained her options and told her that she was a good candidate for surgery.

Surgery Makes a Difference
After discussing the various surgical options, Diane decided to proceed with a Laparoscopic Sleeve Gastrectomy procedure as the best option. “An advantage of this surgery is that the patient leaves with a normally functioning stomach that has been reduced in size and volume,” said Dr. Reich. “This procedure makes the patient feel full after eating smaller portions of food and allows for normal digestion of foods and medications.” Appetite reduction is primarily due to the decrease in the appetite hormone. The combined effect is highly successful weight loss.

To help Diane succeed, the bariatric team at Southern Ocean Medical Center provided not only medical, but nutritional, emotional, and exercise counseling prior to her surgery. Diane’s surgery in April 2017 went well and she had an easy recovery thanks to the bariatric team. With continued guidance and support from the bariatric team, her family and various support groups she’s changed her lifestyle and dropped more than 200 pounds.

Long-Term Success
One of Diane’s biggest fears going into surgery was that it would all be for nothing. She heard stories and knew people who gained all the weight back because they couldn’t stick with the rigorous post-surgery regime.

She knew that for the surgery to be effective long term, it must be maintained properly. “The surgery is not a magic bullet,” says Diane. Through a healthy food plan that included a low-carb, protein rich diet and increased activity levels, she has been able to keep the weight off.

To date, Diane’s Type II Diabetes diagnosis has been reversed, her blood pressure is under control, her water retention is gone, and she no longer has to use a walker. Her sleep apnea also improved to the point where she no longer needs to use a CPAP machine. With a new lease on life, Diane completely replaced her old wardrobe and now has more energy than ever to do the things she loves.