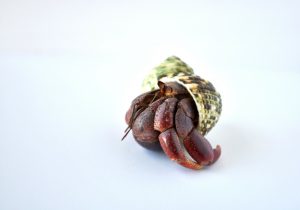 Whether you are a first-time hermit crab parent, or have years of experience, here are some facts you may not know about Purple Pinchers (Coenobita clypeatus).

1. Terrestrial hermit crabs start their life as eggs in tide pools. The hatchlings, called zoea, pass through several stages of growth over forty to sixty days. As they grow, they metamorphosize into a lobster-like form called megalopa. Towards the end of this stage, the crab looks for its first shell and begins to spend time out of the water. About a month later, another metamorphosis modifies the gills to breathe air allowing the crab to permanently stay on land.

2. A group of land hermit crabs is called a cast or cluster. In the wild, they can live in groups of up to one hundred individuals. This is why it’s important to get at least one friend for your hermit friend.

3. The big claw of the hermit crab helps it climb, pick apart food, and acts as a door that blocks the opening of the shell to protect the crab inside.

4. The compound eyes of hermit crabs are on stalks. This gives them 360-degree vision. They can differentiate between colors and shades, but not shapes.

5. Hermit crabs wiggle their antennae as a form of body language. You can imitate this by wiggling your fingers at them.

6. The exoskeleton of a hermit crab is made of mineralized chitin-protein fibers. These fibers also form the flexible rubber-like joints of their limbs called resilin.

7. Technically, hermit crabs are not crabs because their exoskeleton does not extend over their entire body, specifically their tail, and they don’t grow the shell they wear.

8. Hermit crabs are more likely to change their shells around the full moon. Three days before the full moon offer them shells with wide, round openings slightly bigger than what they currently live in. Three days after the full moon, if they have not changed, remove the shells, and try again next month. Leaving the shells in the crab habitat 24/7 can lead to bacteria growing inside them.

9. Their abdomen is also their tail, which they use to hold onto their shell and pull themselves inside.

10. When a hermit crab molts, its exoskeleton will be very soft. Do not handle a crab during this time. The new exoskeleton can take up to a week to completely harden.

11. If a hermit crab loses a limb, it will form a translucent blob at the stump called a jelly leg. When it molts, a new leg forms from the jelly limb. In larger crabs it can take a few molts before the leg is back to full size.

12. Hermit crabs can also regrow a missing eye during a molt. However, the eye will be shorter until after a few molts.

13. Peanut butter is dangerous for hermit crabs because it can potentially stick to and clog their gills. Unsalted peanuts, however, are safe and a good source of protein.

14. Hermits need a constant source of calcium. Calcium chews, cuttlebones, and eggshells are a good source. Calcium sand, however, should be avoided as it hardens when exposed to moisture which can suffocate the crab.

15. Another favorite food of hermit crabs is driftwood. You can give them driftwood you find at the beach, as long as it’s not pretreated wood, pine, or cedar, which are toxic.

16. Hermit crabs don’t have one nose like we do. Instead, they have thousands of tiny hairs on their antennae called aesthetascs that help them smell the air. When they find a potential food source, they rub their antennae on it and taste the end to see if it’s good. Some of their favorite smells are fish, shrimp, meat, and coconut.

17. The ideal temperature for crabs is 70-76 degrees Fahrenheit. If they get too cold for too long, hermit crabs will start dropping limbs. During the colder months, keep their habitat above the floor, such as on a table, and away from windows or vents.

18. One way to quickly warm up your hermit crabs is to put them in your pocket for a little while. Just please don’t forget they are in there.

19. The earliest fossils of hermit crabs date back to the Jurassic era — two hundred million years ago.

20. Worldwide, there are eight hundred species of hermit crabs.

Hermit crabs are fun and interesting pets that never cease to amaze. With proper care, your hermit crabs can live long happy lives.